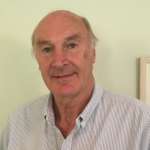 Ian was born in Hampton on Thames where he attended the local grammar school. He joined IBM and worked for them in a variety of IT positions. These included executive roles assuring all UK contract proposals and delivery, running much of the European computer operations and managing International outsourcing contracts. After leaving IBM he worked as an independent consultant in Ireland and the UK. He was invited to become the chairman of Abbeyfield Liss in 2012 and has been a member of the South Eastern Region Strategy Council since 2013. Following the agreement to merge Liss with WVS he has been made a trustee of WVS. He has lived in the Liss area since 1976 when his job with IBM was relocated. He is married with two sons and has a major interest in rugby which he has played, coached and refereed.