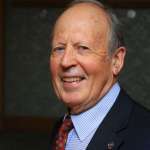 Paul Whitlock was born in Chichester and attended Woodbridge School in Suffolk. After ʻAʼ Levels, he went to the University of Sheffield where he graduated in electrical engineering. Following a graduate apprenticeship with Smiths Industries in London, he worked for Bell South in Atlanta, Georgia and for Bell Canada in Montreal and Toronto – where he met his wife. He attended York University in Toronto where he gained an MBA after which he worked as a management consultant for Coopers & Lybrand (now PWC) in Canada and Ireland. His subsequent career has been primarily in international management with major telecommunications manufacturers such as Plessey and Nortel Networks, but has also involved running a Canadian daily newspaper. Paul and his wife (now deceased) have lived in Farnham since 1987, have three sons all of whom attended local schools including Weydon and then went on to university. They have three small granddaughters. Paul is now retired and in addition to being a trustee of the Society is also a trustee of the Dempster Trust and an active member of the Rotary Club of Farnham.