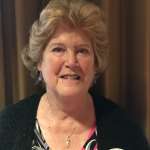 Vice Chairman of Board of Trustees

Gillian spent her teen years in Farnham before moving to London and working as a legal secretary. She then became PA to an MP for several years before marrying and moving first to Scotland, then to Esher with several trips to Indonesia and Libya in between. Gillian’s husband is presently the Mayor of Farnham, but was previously in the oil industry before he retired when he and Gillian moved back to Farnham in 1998. Whilst in Indonesia, Gillian became Treasurer then Chairman of the British Women’s Association, as well as starting up an organisation aimed at helping newly-arrived wives to settle into their new environment. Gillian is now helping to organise Farnham’s annual Heritage Open Days scheme. Her main hobby is singing in the choir and she also enjoys crafts of various kinds.  She has two children, a son and a daughter.  Gillian has always felt very strongly about the importance of dignity and independence for the elderly for as long as possible.